Flight-Sharing: the air travel is being transformed 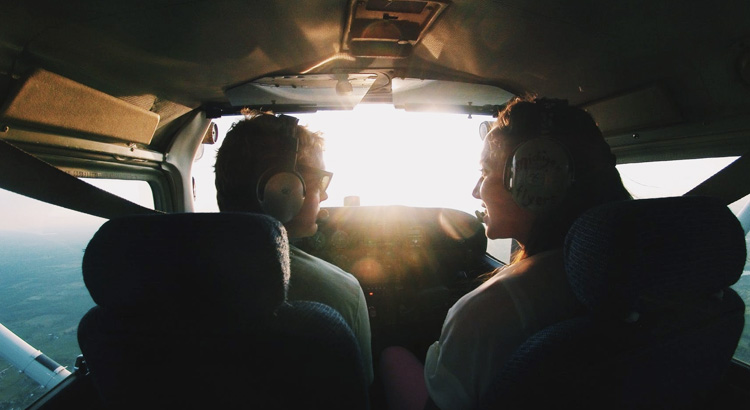 A flight-sharing is a connection between private pilots, who are planning a flight and still have free seats, with passengers who want to share this flight and its cost.

If people share their houses, cars or boats over the Internet – why not their planes? Good thinking, quickly established!

Flying in the Cessna from Barcelona to Mallorca? Or take a private sightseeing flight over the mountains? Not many of us have really thought about such exclusive transport options. Until there were flight-sharing marketplaces. The online platforms for flight-sharing make possible what is normally reserved for the rich and beautiful of this world: Flying on private jets at their whim.

Anyone who wants to enjoy the fascination of flying in small propeller aircraft can increasingly take off for little money. This is made possible by the principle of flight or jet sharing, which works similarly to a car-sharing agency: private pilots offer free seats in their planes on the Internet and take off in the company.

Their passengers pay only a part of the cost of fuel or landing fees. The pilots are not allowed to make a profit. But for them, flight-sharing is a good opportunity to reduce the costs of their expensive hobby.

The blablacar of the skies

On flight-sharing platforms, pilots and passengers come together according to the sharing principle and in fact, the service is comparable to a carpooling service on the net.

These non-commercial flights are mediated on online portals such as Flyt-Club, Wingly, BlackBird or Coavmi. Mainly sightseeing flights are offered, but sometimes private pilots on business trips are also looking for fellow pilots.

The advantage for the customers: They can board directly, the long check-ins of scheduled flights are no longer necessary. And mostly small regional airports, which are otherwise avoided by large airlines, are approached.

As a pilot, you can either offer a flight at a certain price or as a passenger you can search for a suitable flight. This can either be a classic cross-country flight from one city to another.

As with a carpool, you can filter your search by date and destination. Users also leave ratings for each other.

Payment is done online. For example, Wingly now keeps a commission, similar to other sharing platforms.

In addition to the usual liability insurance for private pilots, there is also a special insurance package that Wingly has developed together with insurance company especially for the platform for emergencies.

Flights can burst at any time

Nevertheless, before booking a flight as a passenger, there are some details to consider.

For example, flights can be canceled at any time due to weather conditions. So they are not a reliable alternative to the train or a commercial plane. Passengers should then have a plan B. After all, companies, refund the money to the customers in the event of a cancellation. If the flight takes place, for example, Flyt-Club charges a commission of 10 percent of the flight price, but at least 5 euros. Most other providers also charge a fee.

The so-called cost price flights on a split basis are completely legal. Since 2014, the principle of flight-sharing has been uniformly regulated throughout Europe. Since then, there are more and more flight-sharing centers on the network. According to EU regulation 379/2014, only simple propeller aircraft with up to six seats are allowed to take part in a flight. The costs must be shared by all persons, including the pilot. The average flying hour of a four-seater aircraft costs 200 euros.

Fuel costs, airport fees and, if applicable, charter fees may be charged when sharing flights. If there are four people on the plane, this means that 50 euros are charged per passenger and hour. A subsequent increase in the price, for example, if not all seats are occupied or the flight takes longer than planned, is usually excluded from the online portals.

Pay attention to the flight experience

On the portals, the pilots inform about the flight, the costs, their pilot licenses and introduce themselves. Interested parties can then contact them by e-mail and ask for seat reservations. As a rule, providers can also be evaluated. The principle seems to be catching on. Provider Wingly has already brokered 1,000 flights according to its own information. Meanwhile, customers have a flying experience that large passenger aircraft cannot offer them.

Above the fog. Above it all. In my first private jet with @blackbird pic.twitter.com/ljBzng3CKC

While Wingly is currently developing into the leading platform in flight-sharing, things didn’t always look so rosy for the start-up. Immediately after its foundation in France, the French civil aviation regulatory authority went on the barricades.

They feared that Wingly could take away the jobs of many pilots and declared Wingly’s business model (passengers and pilots share the cost of flights) illegal.

But the EU Commission saw things differently. According to the current law, non-commercial flying in a private jet is allowed, provided that no more than six people including the pilot are on board and the passengers share the costs without the pilot making a profit.

Since the legal situation was clarified, Wingly was able to expand. The offer is now available in many European countries. Compared to commercial flying, flight sharing is a cheaper and more spontaneous way for fellow passengers to get from one place to another.

Private pilots, on the other hand, can finance their expensive hobby. In addition, private pilots must complete twelve flying hours and twelve take-offs and landings within 24 months in order to keep their flying license. With flight-sharing, they can do this more easily and more cost-effectively than before.

Also, the private jets are of course much smaller than the jumbo jets of the commercial airlines. So you don’t sit so roomy, there is no on-board service and the luggage weight is very limited. Also what happens in a small plane is what one knows from small boats vs. cruise liners: it wobbles quite a lot.

It might also not be everybody’s cup of tea to go up into the air with a private pilot. It is true that platforms require at least 100 flying hours from the pilots to be able to offer cross-country flights.

But of course, as a user, you have to trust that the pilot doesn’t mess up and that he checks the aircraft thoroughly in advance. Skeptics can of course also have the pilot’s flight log and maintenance book shown to them.